Did you know Alligator Snapping Turtles (Macrochelys temminckii) are the largest freshwater turtle in North America?

They mostly live in the southeastern USA into the Midwest but have been found on occasion in the far west, even to Oregon.

Male turtles are bigger than females. They can grow up to three feet long and weigh up to 175 pounds on average. The largest Alligator Snapping Turtle weighed 403 pounds! Most live 20 to 70 years but in captivity can live to 200 years old.

They mostly hunt at night and are more dormant in the daytime. They spend most of their time in the water but females crawl out onto dry land when it is time to lay eggs.

They eat fish, insects, reptiles and small birds. The Alligator Snapping Turtle has a special appendage on its tongue that looks like a pink worm. The turtle can wiggle it to entice prey to come closer. Very large turtles can even hunt and kill small alligators. They refuse to eat if the temperature is too hot or cold because they are unable to digest any consumed food.

Alligator Snapping Turtles have a large head with golden eyes. Its shell is mostly green-brown with camouflage type markings on it. The shell has three ridges with large, sharp spikes running down the length of the shell. They have powerful jaws and their bite is so strong it can amputate fingers.

The Alligator Snapping Turtles become sexually mature by the age of 12. They mate in spring and two months later, the female lays anywhere from 10 to 50 eggs in a dry ground nest.

Alligator Snapping Turtles are Endangered. Be very careful when approaching one and Do Not touch them. Several of these turtles have been seen around Historic Banning Mills, so be cautious if you encounter one during your adventure and enjoy watching from a distance! 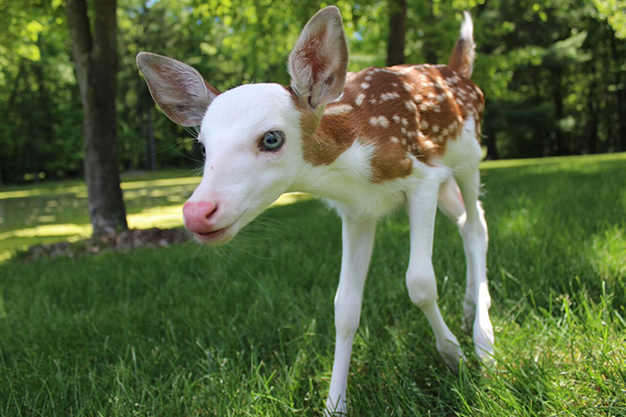 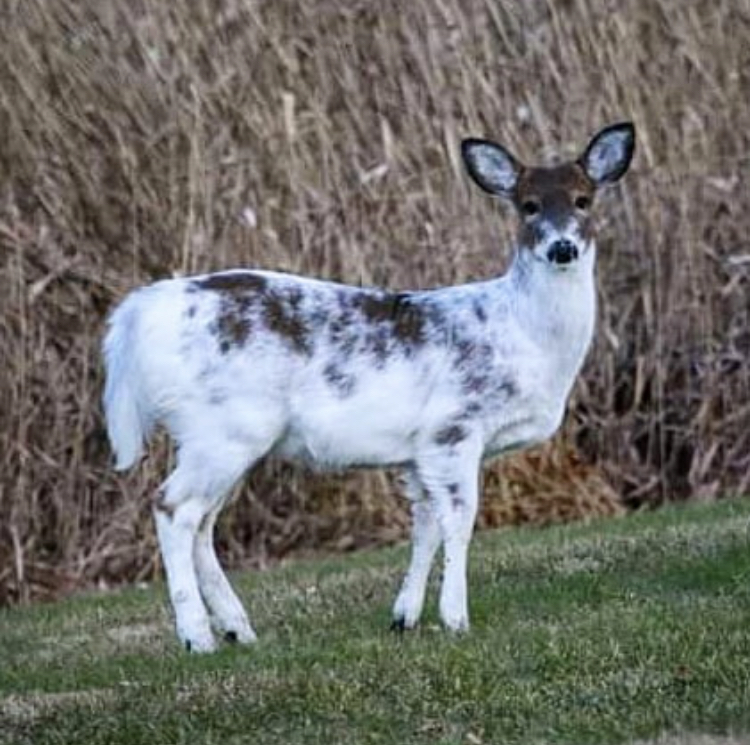 A Piebald deer is really a white tail deer with a recessive trait that causes patches of white all over the deer’s body! Unlike the albino deer, which has pink eyes, a pink nose, and pinkish hooves, Piebald deer have normal brown eyes and nose with black hooves like a normal whitetail deer. Their coloration is due to a rare inherited genetic variation (defect) that affects less than one percent of the white-tailed deer population!

The word designation of “piebald” comes from the word “pie” short for magpie. When used, it’s intended to mean “mixed up” or “bald” (in reference to the white spots).

Due to the rare variation in genetics, these deer also sadly have several other common issues, including:

The Piebald Deer is beautiful and rare to spot in nature. Have you seen one in your backyard? Bullfrogs or Lithobates Catesbeianus got their name because the males produce a cow like “moo” sound. The American Bullfrog is the largest frog in North America with females being larger than the males. The Bullfrog can weigh up to 7 pounds. They have powerful back legs which can measure 7 to 10 inches long and they can jump up to 6 feet. Bullfrogs feet are webbed, making them powerful swimmers. Bullfrogs are typically green to brownish with golden eyes.

American Bullfrogs have voracious appetites and will eat anything that moves and is smaller than themselves such as insects, small fish, reptiles, other frogs, small mammals such as mice, and even birds! Bullfrogs have teeth and a long tongue. It’s ears are larger than its eyes, making its hearing excellent and enabling the bullfrog to find and catch prey easier.

Most frogs have smooth skin and toads have rougher, more textured skin. The bullfrog produces a toxin on its skin that makes it unpleasant to eat. The main predators of bullfrog are raccoons, snakes, large turtles, and birds of prey such as hawks, owls, and falcons.

Bullfrogs will hibernate in the winter and mate in spring and summer. The female can lay up to 25,000 eggs in a single season! Bullfrog can stay in their tadpole stage for up to 2 years. The longer it stays in the tadpole stage, the larger it will be as a frog.

Bullfrogs can also close their nostrils and still take in oxygen through their skin while underwater! They also have a long lifespan. Bullfrogs can live up to 10 years in the wild and 16 years in captivity. 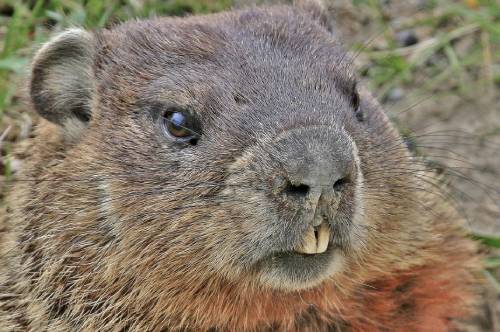 We’ve got several pairs of Groundhogs that like to hang out around Banning Mills. Groundhogs are also called Woodchucks or Whistle Pigs and can be found from the Georgia Piedmont area into the North Georgia Mountain area.

Groundhogs feed exclusively on plant material including fruits and berries, ferns, grasses, leaves and even bark. Groundhogs are most active in the early morning and late evening. Did you know they are excellent diggers? Groundhogs dig extensive networks of burrows which many people find to be a nuisance due to the many holes they create in the ground.

They can climb trees and swim!

They make loud whistling sounds to warn of predators.

They are the largest member of the squirrel family!

Their teeth never stop growing and can average a length of up to 4 inches!

They hibernate beginning late fall for 4 to 5 months. During this time they lower their body temperature to 38 degrees and slow their heartbeats to only 4 beats per minute and take two breaths per minute! King Snakes can be found all over the United States and are often seen sunning themselves on rocks. While they are not a venomous snake, they can bite if you get too close, so they are best viewed from a distance.

King Snakes can be found in swamps, woodlands, grasslands, and even deserts. They can grow up to 7 feet long and weight as much as 4 lbs. King Snakes can be identified by their round eyes and black bodies with yellow and white bands that look like a chain wrapping down their bodies. Some King Snakes may have red and orange bands which can make them easy to mistake with Coral Snakes.

There’s an old saying to help you distinguish King Snakes from Coral Snakes: “Red touching black is a friend to Jack but red touching yellow will kill a fellow!” While this is a great way to identify potentially dangerous snakes, we have an even more fool proof saying to keep you safe: “Don’t touch snakes”.

King Snakes tend to be nocturnal and eat other snakes, lizards, turtle eggs, frogs, and small mammals. King Snakes can rattle their tails in leaves like a rattlesnake when faced with danger. They also emit a foul odor when they are spooked to ward off danger. King Snakes hibernate in winter and emerge during the spring to mate.

Female King Snakes lay three to thirteen eggs. Baby snakes hatch after two to three months and are about four to twelve inches long. King Snakes typically live 20 to 30 years in the wild and while snakes can be scary, King Snakes are very good to have around so please don’t harm them if you come across one! The Raccoon (Procyon Loto) is a mainly nocturnal mammal but will occasionally come out during the daytime, especially if it’s hungry. The name “raccoon” comes from the Powhatan Indian world “aroughcun” meaning “animal that scratches with its hands”. Did you know there are six different species of Raccoon?

Raccoons aren’t particularly picky on where they live, and can be found in the city as well as the countryside. They have a very diverse diet including: birds, insects, fish, mussels, fruit, berries, and nuts. They are also most commonly known for scavenging into any garbage left out by us!

Adult male raccoons can reach 20 lbs! They communicate with each other with over 50 different and distinct noises. What do you call a group of raccoons? A Nursery or a Gaze. They are also very fast for short distances, with the ability to reach up to 15 mph.

Do you like Raccoons? President Coolidge and his wife sure did! They had a pet raccoon that lived with them in the White House! Our favorite thing about raccoons are their cool looking black masks that make them look like little bandits. The black mask isn’t just for show, however. It actually helps them see better by absorbing incoming light which reduces glare.

Remember, while raccoons might look really cool and even cute, they are wild animals and can be very aggressive by biting or scratching if they feel threatened. 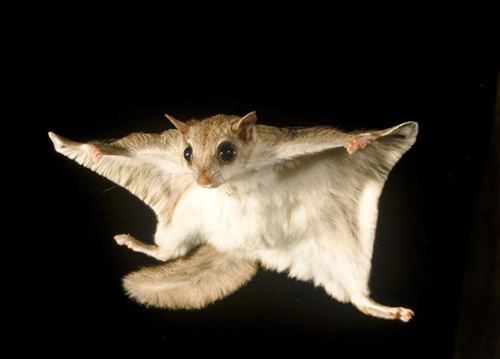 The Flying Squirrel (Pteromyini) is one of over 50 different species of squirrels. They are strictly nocturnal and very social! In fact, 20 to 25 flying squirrels can share one nest! They’ll even share a nest with bats and screech owls! Flying Squirrels live on average about 5 years but can live longer in captivity.

They grow to about 12 inches in length and can weight up to 4 to 6.5 oz They also have large, bulging eyes which give them excellent night vision. Flying Squirrels will only hibernate in very cold weather. They will wake up on occasion during the cold weather to eat some of their stored food that they’ve accumulated and then go back to sleep. They eat tree bark, pine needles, pine nuts, magnolia leaves, maple seeds, oak buds and acorns, slugs and snails, and sometimes small mice and birds.

Flying Squirrels actually don’t fly like a bird, but glide through the air from one place to the next. They have a furry membrane, called a patagia, that stretches from their wrists to their ankles and acts as a parachute. Their tail is large and flat and is used as a rudder to help steer their body. The flying squirrel usually glides 20 – 30 feet but have been documented to glide over 295 feet! River Otters (Lontra Canadensis) are large members of the weasel family. They are semi aquatic mammals that can be found along waterways and coast lines. Otters establish burrows close to the water’s edge with several tunnel openings. Within these dens, otters will have their babies, called pups.

Otters prefer to eat fish but will eat mussels, salamanders, frogs, small turtles, mice, and squirrels. Otters like staying very clean and will wash themselves after every meal. All that eating can really start the add up, as otters can grow to way up to 31 lbs!

They have a thick, water repellent coat of fur and a third eyelid to protect the eye and allow the otter to see while swimming underwater. Otter’s are great swimmers. They can hold their breath for up to 8 minutes underwater. Otters are very fun to watch. They are very social and playful but can also be very aggressive. They will bite and can cause serious damage so do not approach one in the wild.